Bullet Graphs - It's All About the Context

Great, so now we know that bar graphs have a few non-negotiable requirements, but is that it?  Are there other aspects to consider to best display an accurate, informative comparison or ranking?  We’re glad you asked!
​
Context
As we’ve discussed, bar graphs are a great chart type to accurately display a ranking or comparison.  However, does a typical bar graph provide enough information to make an informed decision?  Take the example below, which displays the % of total patient satisfaction surveys by Department that were categorized as positive: 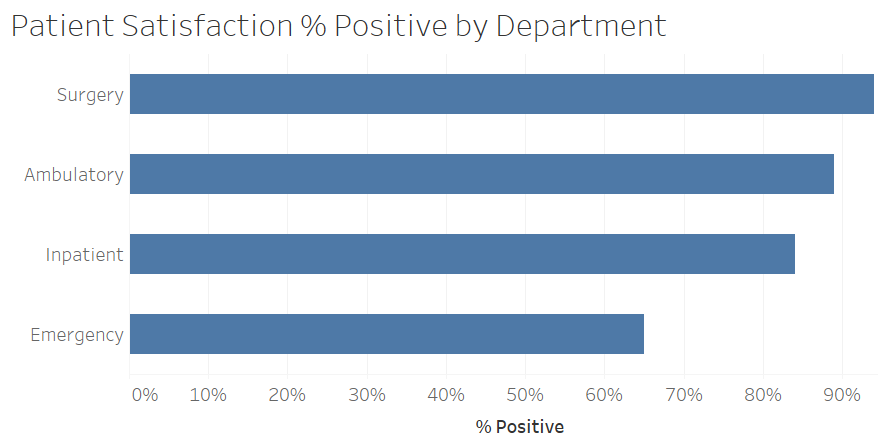 Do your stakeholders never ask about anything else other than what is displayed in a graph or have additional follow-up questions?  Yeah, didn’t think so.  In this example, perhaps knowing which Departments are above target and which are below target would provide sufficient context to make an informed decision.
​
Bullet Graph
Enter the bullet graph, which is simply an improved bar graph.  Take the example below, which again displays the % of total patient satisfaction surveys by Department that were categorized as positive.  However, a target for each Department has been added, symbolized as a vertical black line.  With this information, the user can now quickly see that while the Emergency Department had the lowest % Positive score, it was the only Department to exceed the target.

What makes the bullet graph a great dashboarding tool is that it provides enough context to make an informed decision in a small space.  These advantages make the bullet graph a better option than a gauge or dial chart.  Four gauges would be needed to display the same information as one bullet chart!  As if often the case, there simply isn’t enough dashboard real estate to accommodate gauge charts.
Viz Advantage